The history doesn't stop there folks. If you walk west down Ocean Avenue to the City Pier, you will discover that the pier stands almost exactly where the old railroad bridge over Indian River Lagoon stood in the early 1900s. Many of the buildings and homes in the area hold significant historical value and help tell the story of how Melbourne Beach grew into one of the nicest communities in the country.

“Mel Beach” is the local resident's moniker for their hometown. Located in the southern region of Brevard County's beach side, this quaint oceanside community is vigilant about maintaining the charm of living in a small town. In 2008, Melbourne Beach resident's successfully subjugated an attempt by Walgreen's pharmacy to build a large store within town limits.  You can still find a locally owned grocery, drug store, and hardware store on Ocean Avenue, the main street through town.

Several municipal events take place each year that add even more community appeal. One is the bed race at the Iceman's Festival, and another is Founder's Day which has grown to be a very popular gathering. Almost all the community events are held in Ryckman Park, which is an ocean front acre of picnic tables, volleyball courts, and white sandy beach.

The Majority of homes in Melbourne Beach are not vast estates, but modest size ranchers with well groomed lawns, many with mature palm trees, backyard pools, and garages full of surfboards, kayaks and every other essential piece of equipment when you live just a block or two from the Atlantic Ocean. Just south of town on the A1A road to Sebastian Inlet, beach front homes and condominiums line both sides of the road, all with grand views of the river and ocean. Large two and three-story beach houses share the beach front with smaller homes and cozy little motels. Oak Street, which runs south through Melbourne Beach, is where you'll find an elementary school, baseball and soccer fields and a public golf course. Hidden away along the riverfront are many beautiful homes with large mature trees, and docks that reach out over the lagoon. Just south of these residences are many river accessible neighborhoods with canals and docks for each home.

The attraction of living in Mel Beach has brought with it the same allure for visitors and entrepreneurs alike. Several exceptional restaurants line Ocean Avenue, along with a bed and breakfast, shops and cafes. The town grocer has an excellent reputation for his selection of gourmet products, delicatessen and on premise butcher. These businesses lend a feeling of a culture where people enjoy the finer things in life.

Inarguably one of, if not, the finest location for an Oceanfront, single family residence along Florida's booming Space Coast. Tucked away with a private drive at the Nor...

Perfect family home for multiple generations that demand needed privacy. Located in the heart of Melbourne Beach and close enough to walk to beach, parks, shopping and m...

Just the 2nd lot in from the oceanfront and 2nd lot off Downtown Melbourne Beach's main drag. This property location is one of the best in town. Walk, bike or golf cart...

Nestled in one of the most sought-after locations on the entire Space Coast. This fixer upper is waiting for your finishing touches. Exclusive neighborhood with a Private...

Nestled on the dune overlooking the Atlantic ocean, this beach home is perfect for someone who's must have's include oceanfront direct access, separate bedrooms on separa...

You will love this home that is located in much sought after Floridana Beach. This well maintained beauty boasts new roof 2018 and new A/C plus duct work in 2019. Large n... 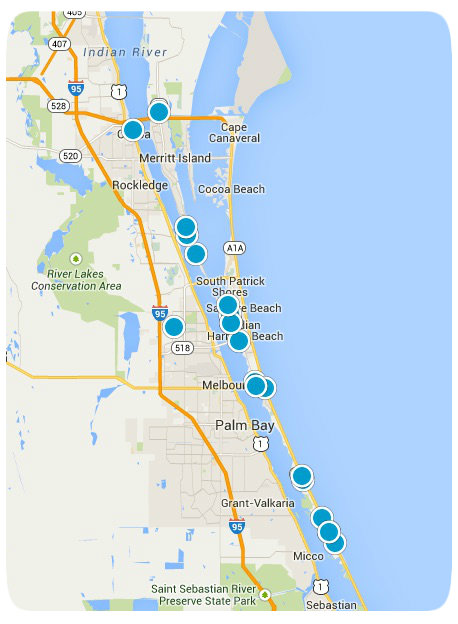